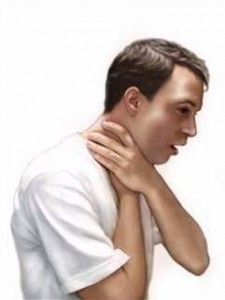 An acute airway blockage is an urgent life-threatening medical condition that can seriously result in death if care delayed or not given.

Airway obstruction is the partial or full blockage of the airway passage in the trachea and/or any underlying passageway of the respiratory system. Partial obstruction can result in low oxygen perfusion of organs and tissues (hypoxia) and possibly a cause of respiratory and cardiac arrest. However, if the airway is completely blocked , permanent and irreversible brain damage and death will certainly occur in a matter of minutes due to the inadequate oxygenation and perfusion of tissues. Air movement is normally absent in the presence of complete airway obstruction. Oxygen levels in the blood drop significantly mainly because an obstructed airway prevents entry of air into the lungs needed for oxygenation. Oxygen deficit occurs in the brain which results in loss of consciousness and eventually death.

Upper airway obstruction has varying causes which include anaphylaxis, aspiration of foreign objects, trauma to the airway, viral/bacterial infection, inhalation of noxious substance and chemical burns. For the elderly individuals, especially those who are frail and have existing chronic medical conditions such as diseases affecting motor coordination (Parkinson’s disease), and mental dysfunction (mental retardation and dementia) are high risk factors for asphyxiation.

For a normal healthy adult, the most common cause of upper airway occlusion is aspirating large quantities of food in quick succession which can block the passageway of air. Children on the other hand, have the following common objects getting occluded in their airway such as small toys, buttons, coins in addition to aspiration of food.

Underlying medical conditions such as an abscess in the tonsils or surrounding region, inflammation of the epiglottis and other acute infectious diseases affecting the upper airway track can result in blockage of the airway.

Normally, a person with a foreign object embedded in his/her airway will almost always manifest a universal distress by asking somebody for help mainly because he/she cannot speak, breath or cough. The victim usually clutches his/her neck between the thumb and fingers which is considered to be the universal distress sign of airway obstruction. Other common signs and symptoms may include chocking, apprehensive appearance, labored breathing, flaring nostrils, increasing anxiety and apprehension, restlessness and feeling of impending doom. When help is delayed or emergency care is not given immediate loss of consciousness develops as hypoxia worsens and irreversible brain damage is possible.

If the patient can breath and cough spontaneously, partial obstruction is a possible diagnosis. The victim is encouraged to forcefully cough and continue with persistent coughing and breathing efforts as often as possible in order to have a good exchange of air and oxygen. The victim might exhibit sporadic wheezing in between coughs primarily due to the narrowing airway. If the victim is demonstrating a weak and ineffective cough accompanied by high pitched noise, increasing difficulty in breathing and cyanosis. The management of these symptoms should be approached similarly for complete airway obstruction.

Following removal of the foreign object blocking the airway, rescue breathing should be initiated. If the victim has absent pulse, chest compressions should also be started while waiting for emergency medical services. This cycle of Cardio pulmonary resuscitation effectively provides more time in assisting the heart and ventilatory activity before advance life support and management is instituted.